O, how I hate that stupid “Ancient Aliens” show on the “History” channel. Tonight, as I was scrolling through the channel guide, I happened to see the info for an episode that was about to go off. The title of this episode was, “The Satan Conspiracy”, and the description was

Ancient texts indicate that Satan may have been an extraterrestrial…

Um… yeah, if you believe what the bible says about Satan, that he exists at all, and where he came from, then of course he’s an extraterrestrial. Because what is an extraterrestrial? According to dictionary.com, it’s, “outside, or originating outside, the limits of the earth”. That sounds like what the bible says about Satan, God, angels, pretty much everyone who wasn’t created on the Earth. Of course, I think Satan, “the devil”, “Beelzebub”, etc., are just allegories for evil, and not an actual being, but this still really annoys me.

I’m really ready for idiotic shows like this (and those celebrating semi-literate rednecks) to run their course and go away. 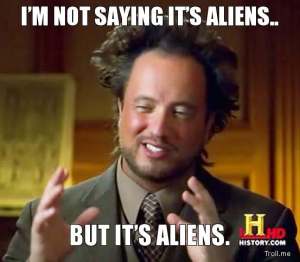